November 20, 2016 – Drought conditions across most of Georgia have worsened, with no measurable rain seen locally in almost two months.  Despite the shortage of rainfall, our water system  has an abundant supply in the Ocmulgee River.
The Ocmulgee River is currently flowing at 258 cubic feet per second at our raw water intake.  That is well below the usual minimum level of 400 cubic feet per second, but even at this reduced rate of flow, 167 million gallons per day flow past the intake.  Our system only withdraws about 2.5 million gallons per day.
On November 17, 2016 Georgia Environmental Protection Division Director Rick Dunn announced that an elevated drought response was necessary. Fifty-two counties, including Butts County,  have moved from Level 1 to Level 2 Response, requiring outdoor water use restrictions. An additional 58 counties have been included in the State’s drought declaration, at the Level 1 response level.
Level 1 Drought Response generally requires public outreach and voluntary water use restrictions. Outdoor water use is allowed in the Level 1 (and counties not declared for drought response) between the hours of 4:00 pm to 10:00 am, daily.
Level 2 Drought Response adds restrictions to outdoor uses. Outdoor landscape watering is only allowed two days a week, determined by odd- and even-numbered addresses. Even-numbered addresses and properties without numbered addresses may water on Wednesday and Saturday between 4:00 p.m. and 10:00 a.m. Odd-numbered addresses may water Thursday and Sunday between 4:00 p.m. and 10:00 a.m.
Prohibited outdoor water uses under Level 2 Drought Response include: 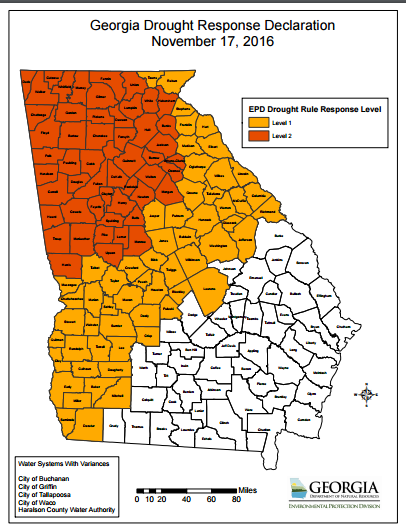